From Molly: What is one of your stories you like telling over and over?

You know me: You asked me for one story, and you’re going to get a bunch. As coincidence would have it, I like to tell and retell stories about you. So I’m going to do that here.

A lot of my stories revolve around what a smarty pants you are. Your sister and all your Burke and Nelson cousins are highly intelligent and creative, but the unique ways in which you’re smart make me laugh. Sometimes I feel like you’re a little human computer—like if I typed search terms on your forehead, the answers would come out of your mouth. Maybe I should try that the next time I see you!

One story I like repeating is about something that happened when I was staying with you in December. I was in the guest room reading, and I heard you crying in the kitchen, “Dad?” Then I heard you moving down the hallway toward your room, repeating “Dad?”

Then you opened the door to my room and sobbed, “Katie, do you know where your brother is?” That made me smile because even in a moment of upset, you were aware of exactly how the Burke bloodlines are drawn. Plus, I can never stop laughing about the fact that you call me “Katie” instead of “Aunt Katie.” You really are such a character.

In fact, you were in pretty rare form over the holidays. Uncle Erik mentioned that in the few days before I arrived in Phoenix, he’d noticed that you were being extraordinarily nice and helpful. In my first few days in town, which happened to be the few days remaining before Christmas, I had a similar observation. Several times, you were being considerate of Abbey, and you made a point of saying out loud that you were doing so.

On Christmas Eve, after you’d bumped your knee on your tile floor while doing gymnastics, your mom was icing it down. At one point, she asked whether she should keep icing it, and you said she should stop because Santa might be approaching the house, and he might not come in if he saw that you were still awake. Your mom correctly assured you that Santa wouldn’t skip over your house, and that he knew you had to take care of your knee.

Putting two and two together, I think you were acutely aware of Santa’s impending arrival, and that perhaps you were ensuring your place on his “good kids” list by being sweet with Abbey for extra credit. I know you adore your little sister anyway, and that you don’t need a reason to be a thoughtful big sister to her, so maybe you were just being nice to her “for no reason at all,” as you once said in one of your story questions to me.

In fact, you were kind to Abbey even after Santa had visited your house. As your infinity gigabyte computer brain probably remembers, little Abbers was super sick over the holidays. One night after Christmas, you and she were hanging out on the bed in my guest room, and you offered to be a pillow for her to rest on. I love the photos of that because you both look so happy. See? 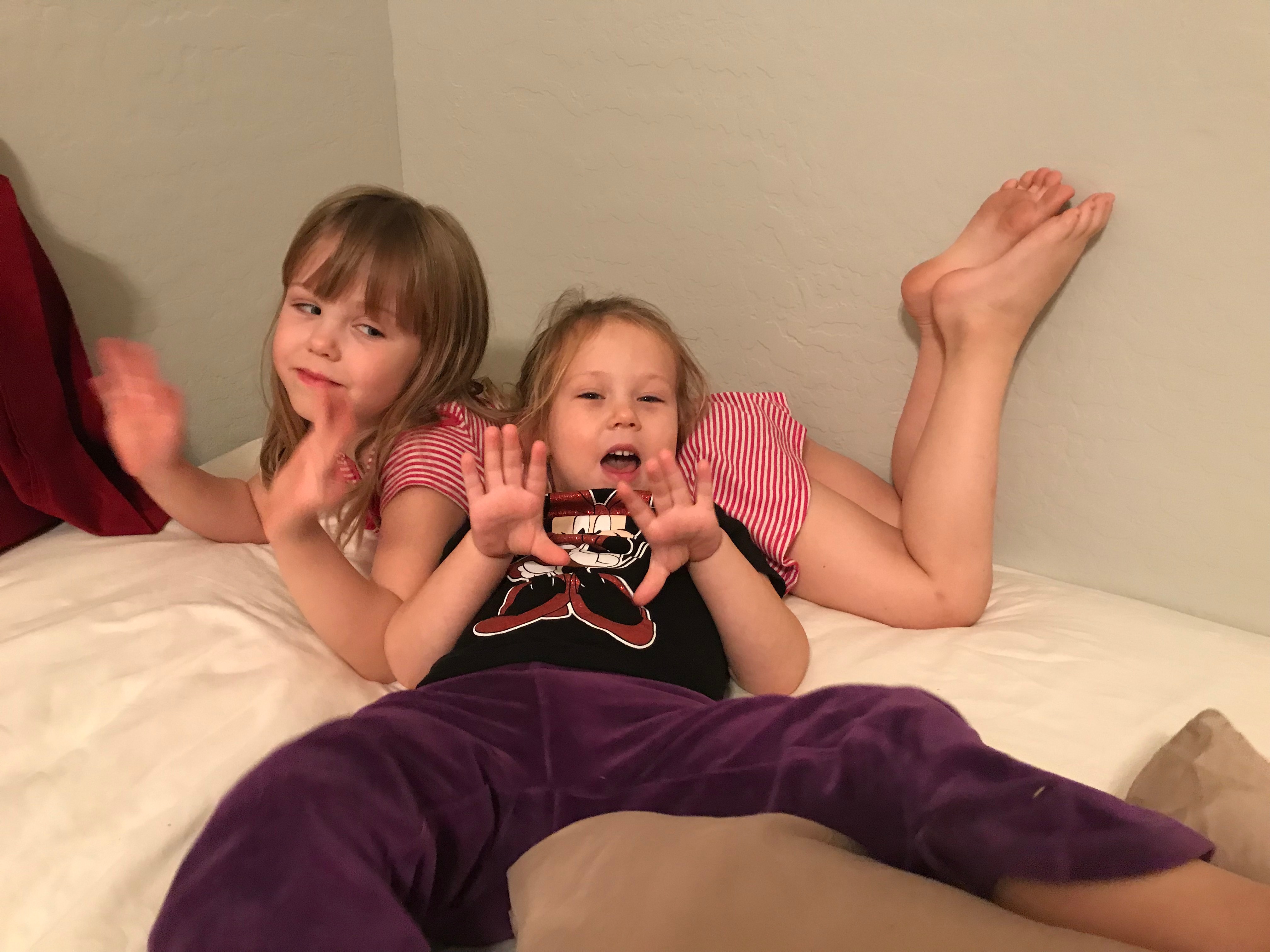 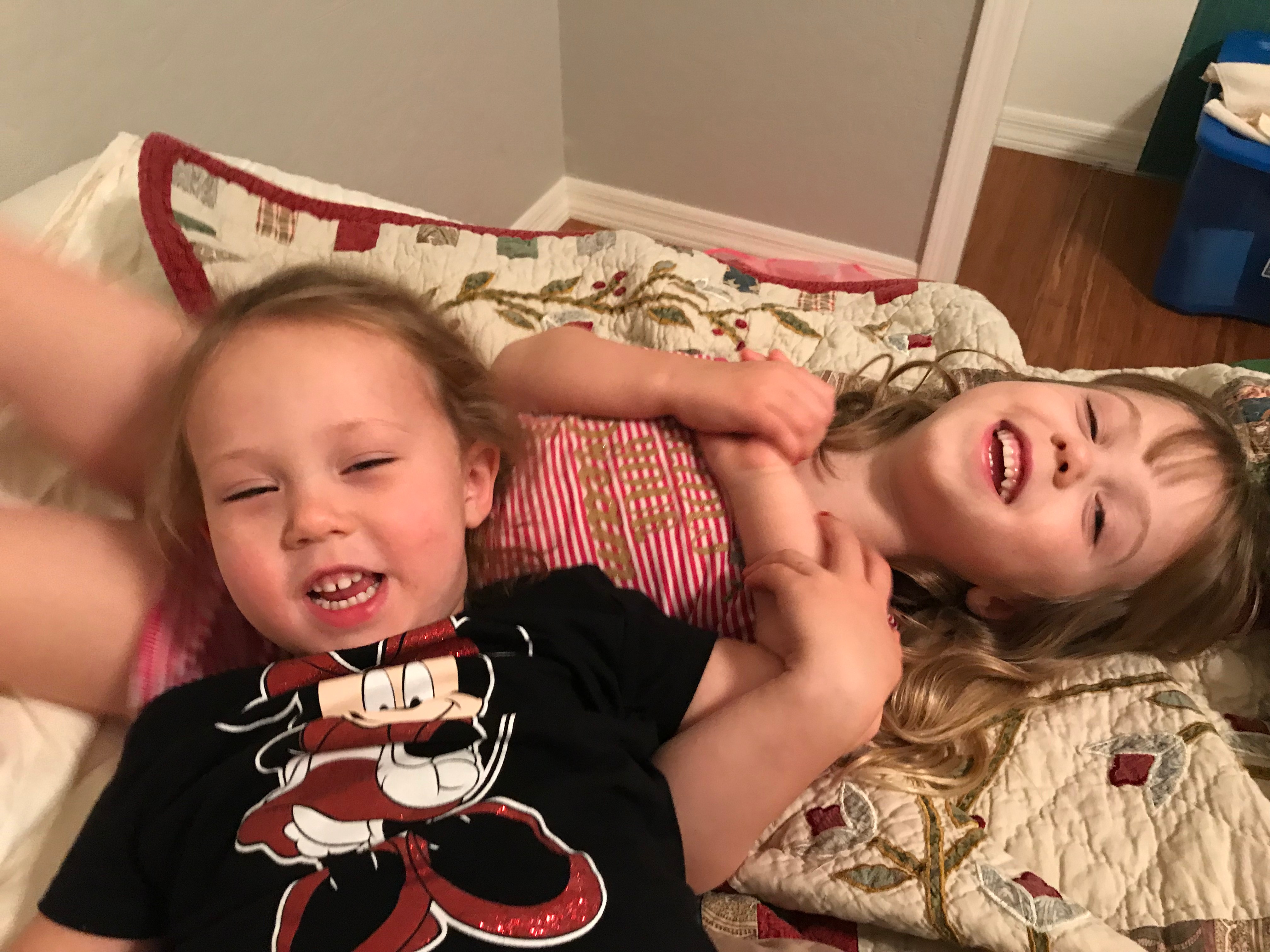 And if you ever needed proof of how much Abbey admires you, look at these two pictures: 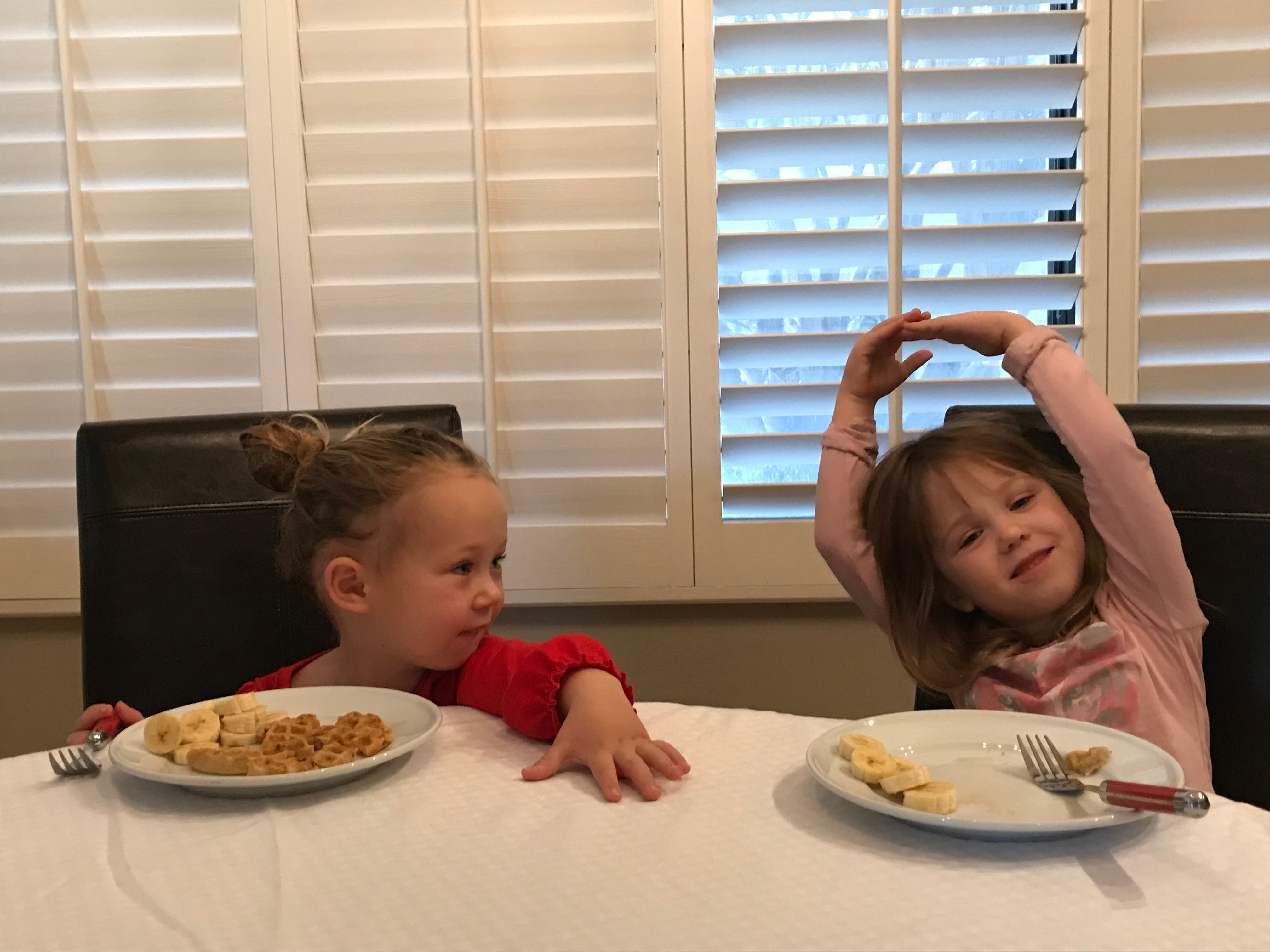 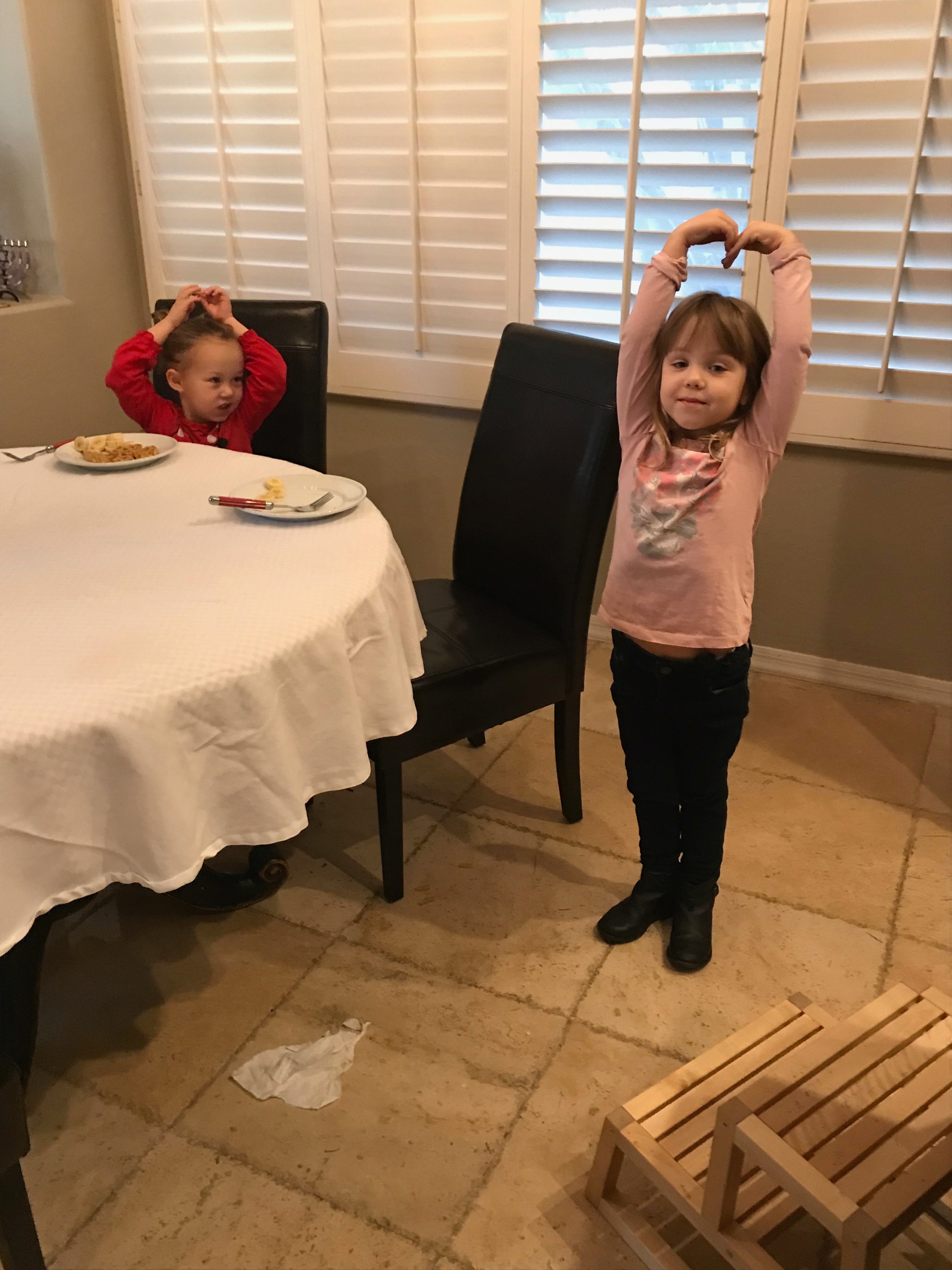 Or listen to her pointing you out during your holiday group performance at Desert Stages Theatre:

You two are so cute together. See? 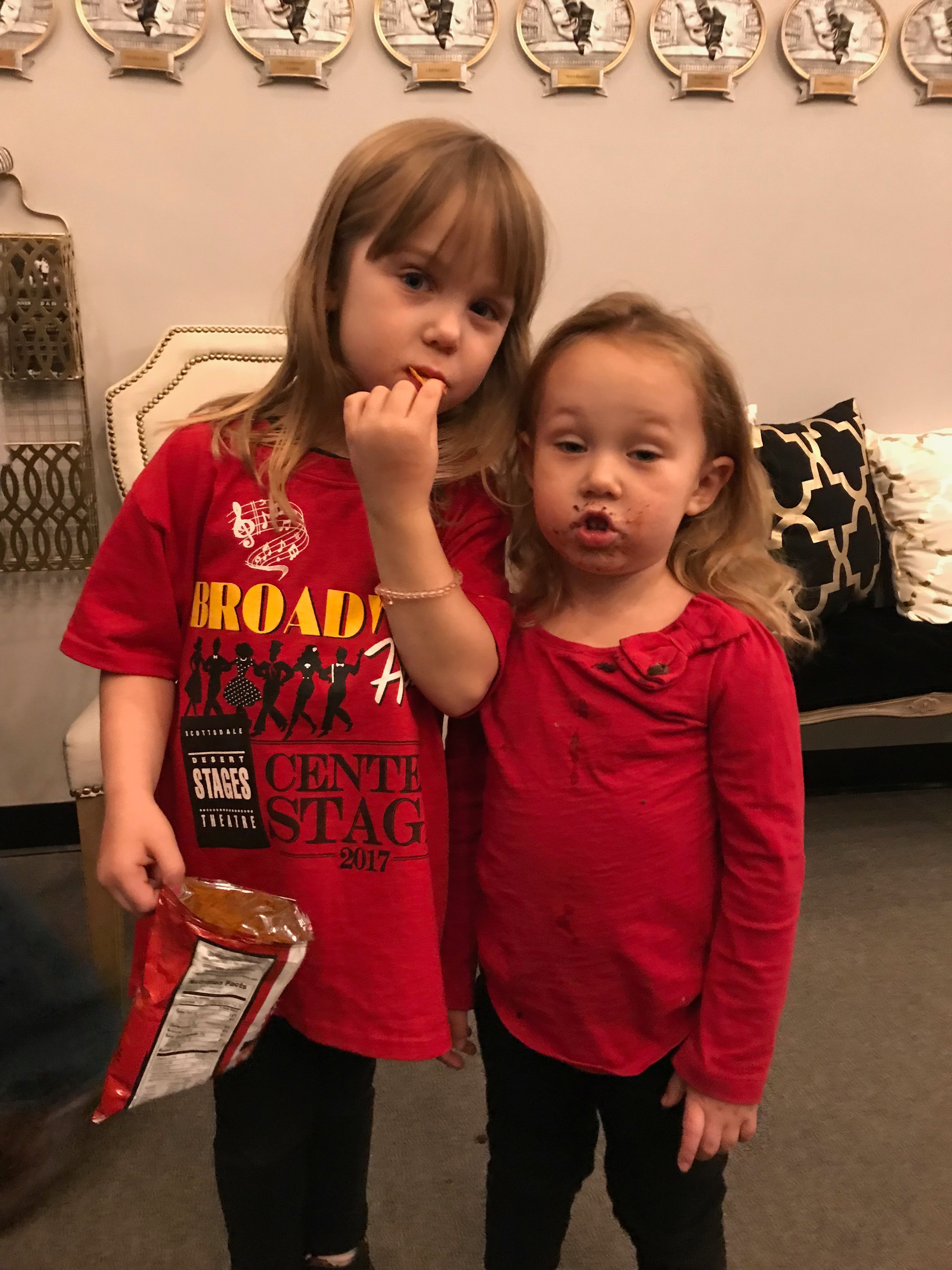 BACK TO YOU BEING SMART

Oh … and here’s another holiday story I love to tell about you: You and I had a two-person slumber party in my guest room on Christmas Eve. You slept on the guest room floor, next to my bed, in a new sleeping bag you’d just received as an early Christmas gift. After exchanging a few words, you and I went right to sleep.

In the morning, I woke up when I heard you stirring in your sleep. Seconds later, you opened your eyes, shot up into a seated position, and asked no one in particular, “Are you sure Santa’s finished out there?”

You were looking straight ahead, at the door. From above and to your left, I asked, “Are you talking to me?”

Startled, you looked up and over at me, then said, “Katie, let’s go out there and check!”

Holding hands, we ran down the hallway and saw a wonderland of presents in your living room! When you saw the purse below, you exclaimed, “Oh, shoot!” From your words, I thought you were disappointed, but in fact, you were super excited. 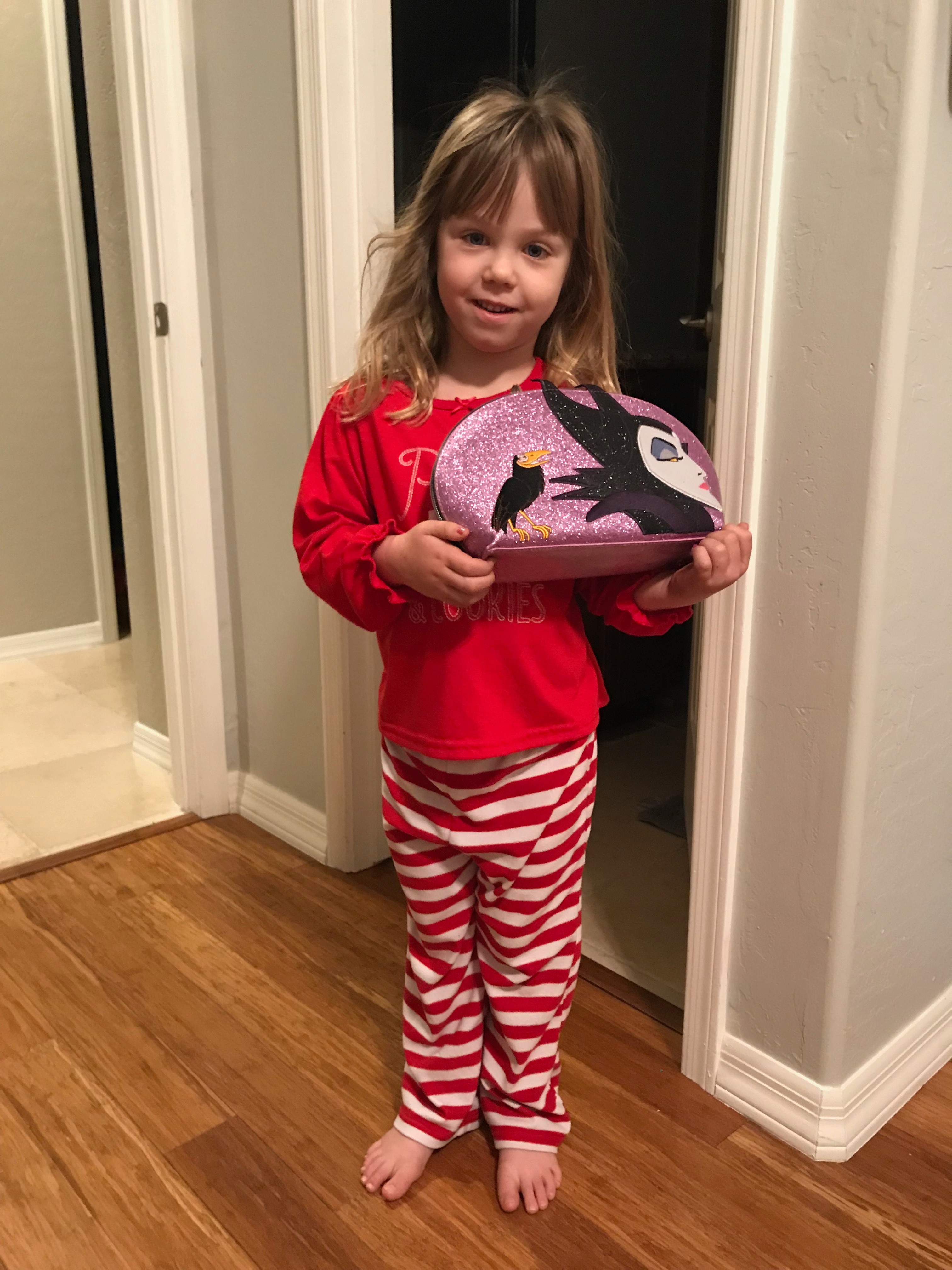 And as I’m sure I will tell people many times, when you saw that photo of you and your purse, you immediately asked, “Wait—why is she on this side of the purse?”

You were referring to the queen or the witch on your purse; just before I took the photo, you had held the purse up to yourself in front of a mirror and looked at it. Within a second of my taking the photo, you noticed that the photo image was the opposite of the mirror image you’d seen moments before. It takes some advanced brain power to perceive that image flip so quickly.

BACK TO ABBEY ADMIRING YOU

I could tell stories about Abbey admiring you for days, and I’ve got the video proof to back it up—and not just her talking about you when you were on stage, either.

I know your computer brain remembers when your Great-Aunt Nancy—or as you probably call her, “Nancy”—gave you, Abbey, Eliza, and Willie piggy banks on Christmas night. Well, watch the video below, in which Abbey is enthralled with her piggy bank, but she abandons it to watch you use yours.

Now that you’ve seen the video of you and Abbey using your piggy banks, do you want to see Eliza and Willie using theirs? Here they are.

ONE OF YOUR RECURRENT STORIES

What is one of your recurrent stories, Molly? And how often do you tell it? Have I ever heard it? I’d love to know.