From Brennan: What was the greatest physical challenge you ever faced? How did it turn out?

WOW! You really are good at these questions. When I read this one, my first thought was that I should interview Aunt Margie and write up her responses, since out of all the adults on the Burke side of your family, she is the most devoted to physical challenges.

I like to run and hike on the weekends when one of my friends puts a plan together; and I belong to a structured hiking group, and go on the hikes when I’m not busy. I love running, and in groups, I always say yes when someone asks whether we should go further before turning around. But otherwise, I don’t take on a lot of physical challenges. I just joined one of San Francisco’s oldest running groups, so I’ll let you know how that goes.

In fact, when I was in New York in November for Aunt Margie’s marathon, I was surprised when she asked me, “Do you still want to run a marathon?” I told her I never wanted to run one, and she said that back when your mom and dad ran the New York marathon, I’d told her I wanted to run one, too. I believe her that I said that, but I can’t imagine it!

In 2006, I was really into running, and would leave my downtown San Francisco office at 4:00 p.m. every day to run along the Embarcadero, down to Fisherman’s Wharf, where all the tourists are. I would be out for a couple of hours, not running the whole time, but alternating between walking and running. Then I would come back and do another hour or so of work before going home. I kept up this routine for eight years, then stopped.

Running along the Embarcadero and the Wharf was great people-watching, and since this area is by the water, it was a beautiful place to run. In fact, I’ve just resumed this routine because I haven’t done it in years and have missed it. I’m happy to be back to it.

One of the most interesting parts of that running route was a person called “The Bushman,” who held leafy branches and crouched behind bushes on the Wharf, occasionally jumping out and scaring passersby, for whatever cash people put into the bucket he kept beside him. Here are a few photos of him, including one where he’s in the act of scaring a tourist: 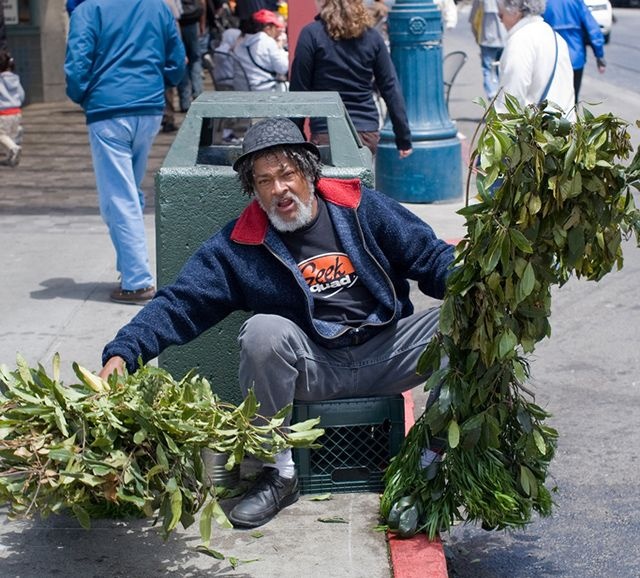 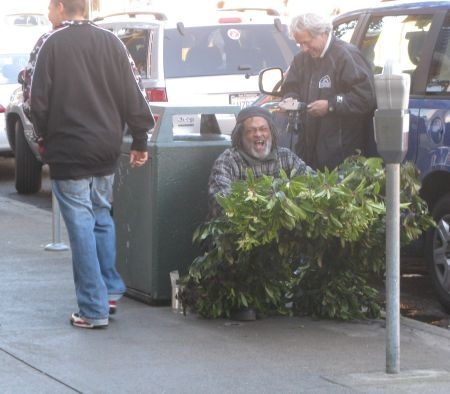 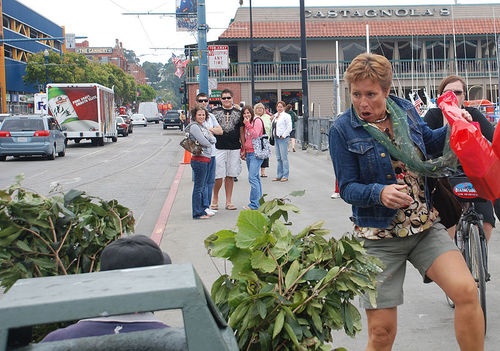 When I was in New York in November, I was walking through Times Square one day and came upon a Bushman equivalent—one of many, I’m sure. It was the Statue of Liberty on stilts, one wearing her regular garb, and the other sporting an American flag. See? 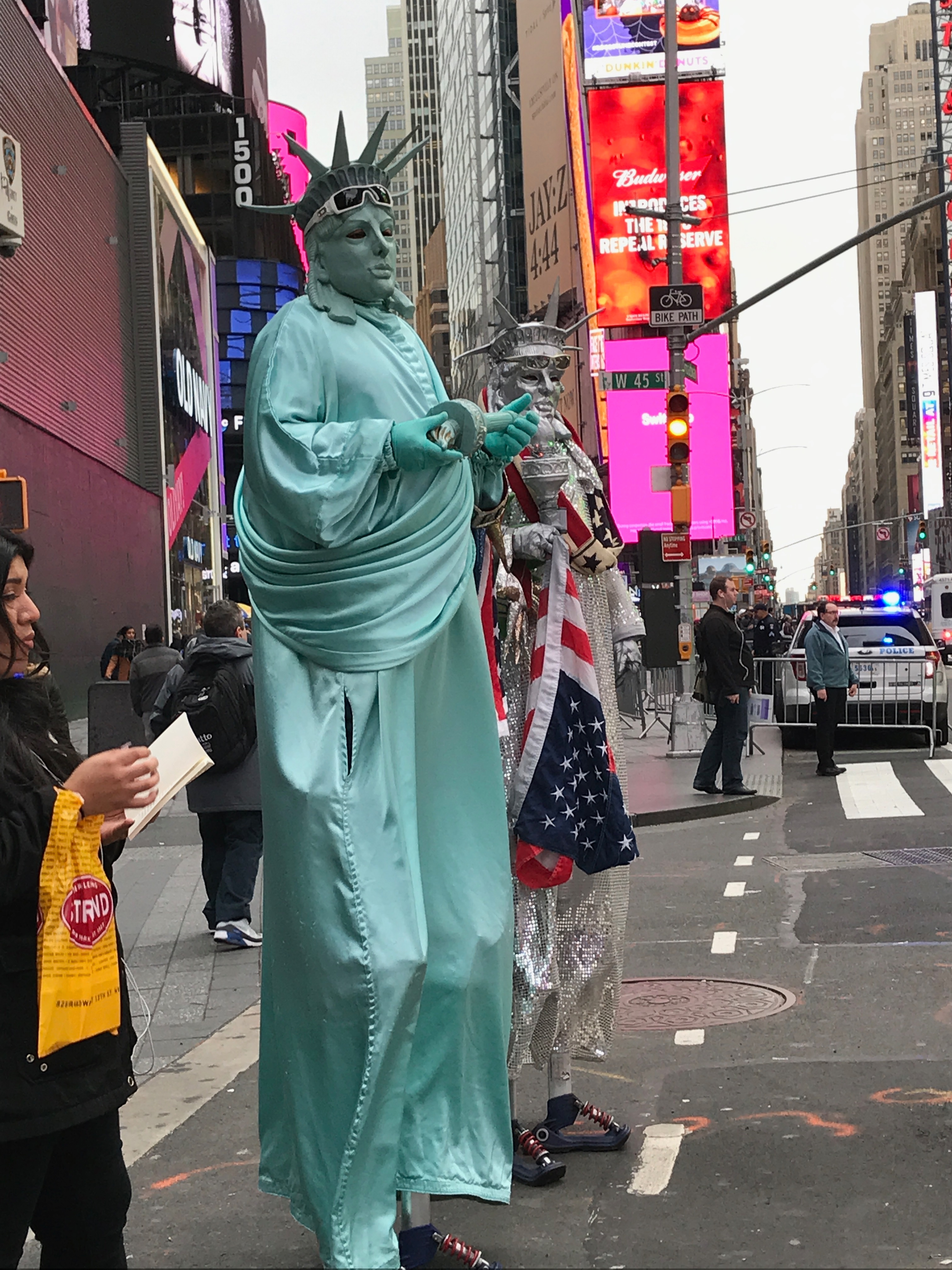 Anyway, in March 2014, I read in the news that The Bushman had died. I wrote a story about him for KQED, Northern California’s public radio station, specifically for its “Perspectives” segment, where listeners read three-minute essays on timely and local stories. The “Perspectives” editor accepted my submission, so I read it on air a few days later.

To hear The Bushman’s legacy in my life, you can listen to my “Perspectives” reading here:

Or you can read this transcript:

A more veteran runner with Embarcadero experience, my friend said, “Watch out for the guy who hides behind tree branches and jumps out at tourists!”

The next day, forgetting all about my friend’s warning, I took my first run on the Embarcadero, ignorant of any crouching human trees. I was shocked when an apparent sidewalk shrub started growling, and a human figure emerged from behind what was only a pair of leafy tree branches, arranged in such a way to hide the man while he’d been hunkering down.

The jumping tree man got me. I leapt up and screamed.

Last week, I read the jumping tree man’s name. Gregory Jacobs was in the news, which reported that he had performed this feat for thirty years. From his plot of sidewalk on Fisherman’s Wharf—the most touristy spot in San Francisco—he had spent decades frightening the guts out of people for donations.

Many called him The Bushman, but few reportedly knew that he had an associate, David Johnson, who held the bush while Gregory told jokes to bystanders. Fifteen years ago, the two had a falling out over money, and worked separately from then on. But that wasn’t the whole story. Gregy died two weekends ago, from heart problems that had hospitalized him multiple times before his death.

I’ve been running regularly along that Fisherman’s Wharf stretch for the past eight years. One might think I’d have acclimated to the jumping tree man at some point. But on more days than not, my runner’s high rendered me unguarded by the time I arrived at his post.

He didn’t choose me every time, and sometimes I was ready, creating sufficient distance to protect myself from being a target. But I’d say he has vaulted at me about ten times in all those years, yielding his intended effect with every jump.

Gregory, I will miss our little game. Our city has a tree-branch-shaped hole now, and my running path won’t be the same without you.

Early in 2008, a couple years after I had become a runner, I took on a more extreme physical challenge. My friend Dulci said she wanted to do the Avon Walk for Breast Cancer, and asked if I would train and walk with her. So I did, and on July 12 and 13 of that year, we walked 39.3 miles, the distance of a marathon and a half.

To prepare for the walk, we raised funds for breast cancer research and treatment. The goal was $2,000, and while I don’t remember how much I ultimately raised, I know I started my fundraising campaign on March 16, reached $1,800 by April 2, and continued raising money through July. Here is the photo from my fundraising page: 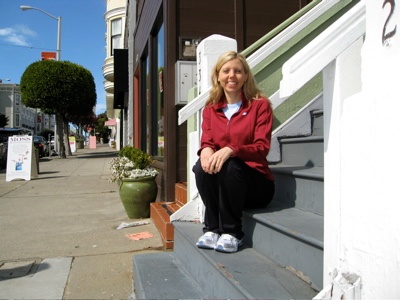 Since the walk is a two-day event that ends on the evening of the first day and continues the morning of the second, Dulci and I stayed overnight at Carol’s house. Carol lives near Crissy Field, where Avon had set up tents for walkers to camp in overnight—something that sounded fun, but which we’d heard from previous walkers was cold and very uncomfortable.

Though the walk was posed as a physical challenge, and we did have to train for it, it was pretty easy. I mean, how hard can walking be? The most difficult part was dealing with blisters. We were well-prepared for that, with special blister band-aids that we changed several times over the two days, which worked great.

I can’t imagine this would have been a positive experience if we’d had to camp. The highlight was coming home to a dinner Carol’s husband had cooked for us, then taking baths in shifts, which really helped our sore legs and beaten up feet.

The hardest part of the walk was getting separated, which we did often because we each wanted to go at a different pace. So it’s not like we got to hang out for two days straight; rather, we ended up meeting a lot of different people, which was nice in its own way but not what I’d expected.

What about you, Brennan? What’s the greatest physical challenge you’ve ever faced? Look forward to hearing about it sometime.